As public and private spaces are shifting at an increasingly rapid pace to be more connected, the global flow of materials, aesthetics, and interfaces ensures that the visual rhetoric of the urban world, individual homes and virtual spheres are increasingly similar. We are forced to relate inside of these built and coded environments, bending and adapting uniform mediums and platforms to express a multitude of subjectivities, experience, tastes and desires.

The struggle to reconcile a “humanity” and culture with current technologically inflected forms isn’t new. In his 1952 lecture Art and the Symbol, Lewis Mumford criticizes Francis Bacon for “...pinning[sic] every hope for human improvement upon the development of mechanical invention.” He goes on to say Bacon “ ...did not foresee that the humanization of the machine might have the paradoxical effect of mechanizing humanity; and that… the other arts, once so nourishing to a man’s humanity and spirituality, would become arid, and so incapable of acting as a counterpoise…”

In light of our new physical technospheres, smart homes and screen-mediated social and information exchanges, how do we define, understand and reckon with our complex, sometimes soft, sometimes violent, and often messy animal selves? What do we do with the erratic data of our lived experience? Animal Architectures presents the work of three artists who navigate this ever-evolving territory without relying on primitivist rhetoric or cyborgian fantasy. By using and re-purposing the materials of contemporary industry to talk about memory, heartache and the body, the grotesque and the tender, Allegrucci, Nagano and Osburn map a hybrid space that is sculptural, temporal and performative.

Using infinity mirrors and animated loops, Daniel Allegrucci’s objects and animation reference orifices and portals, both natural and constructed, that are at once comforting, metaphysical and threatening. Made with a combination of found and industrial materials charged with personal meaning and shaped into organic forms, “Passages” distort our perceptions of light and space evoking a liminal place between the viewer and whatever lies beyond. The hypnotic “Peristalsic Tunnel” is an animated oracle of circling teeth and pulsing bands of texture that welcome and reject us.

Seirin Nagano’s delicate etchings, titled “Intimate Geometry,” are dual images, drawn first in glass and then redrawn in shadow. These images, both fixed and mutable, reference architectural forms that are not quite realized, impossible to inhabit but representative of the psychological and emotional human activity that architecture contains. Nagano’s video projections reproduce this tension by binding cloud-like fluid imagery that transforms organically over time within the symbolic, fixed form of a home.

Adapting free online PowerPoint templates into a performance backdrop, Dana Osburn filters banal experiences, physical and emotional, through song, dance, live-eating and media-based sign-systems. “Compression Guidelines for Reduced Bandwidth Situations and Other Feats of Strength” pits the linear comfort of organizing and replicating experience through pre-designated layouts, newstreams, headlines and status updates against the failure of mass media and systematized modes of communication to process the unpredictable intricacies of our specific lives. 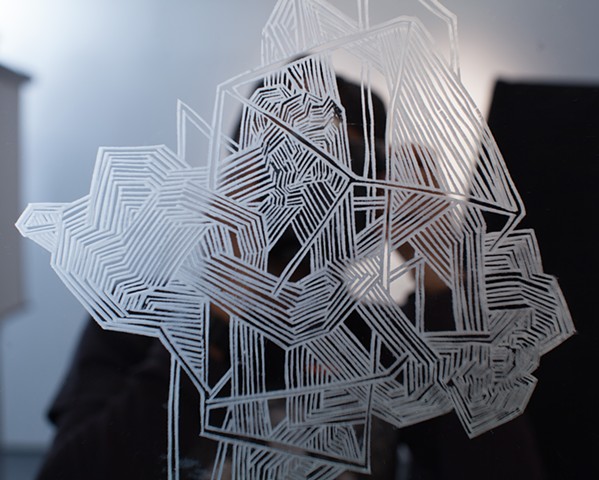 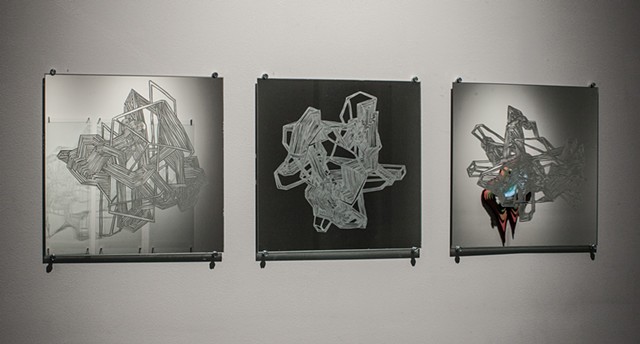 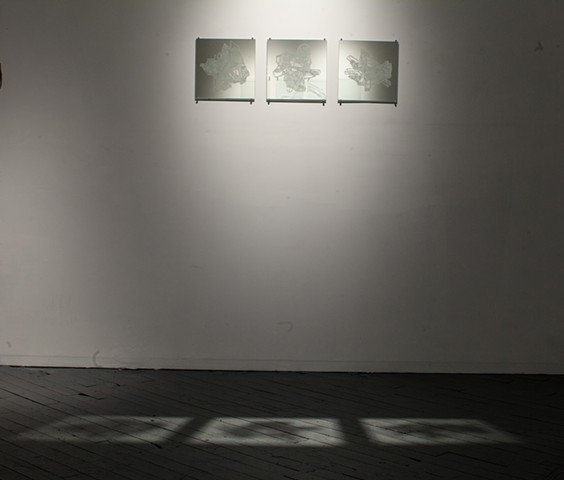 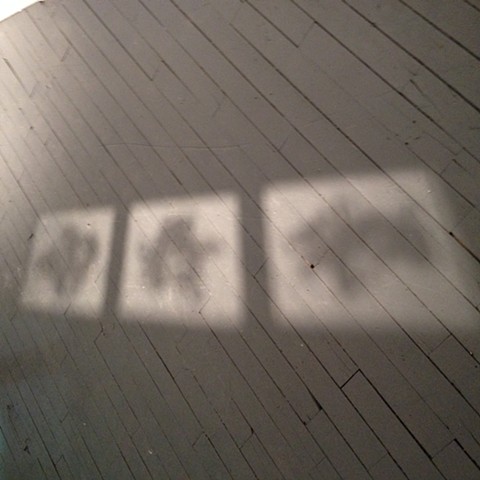 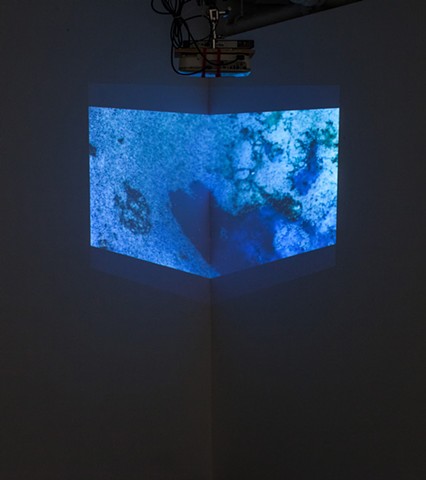 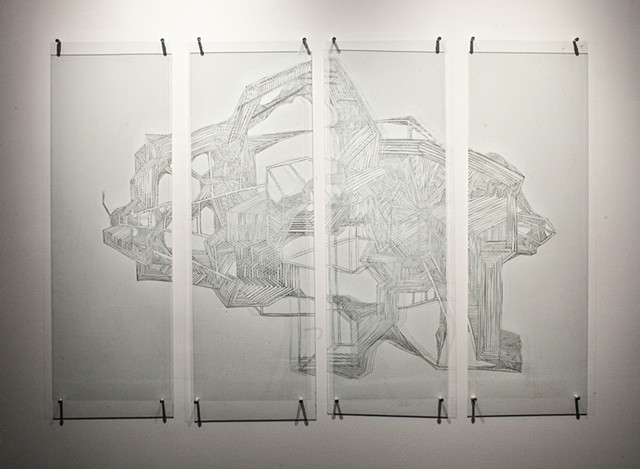 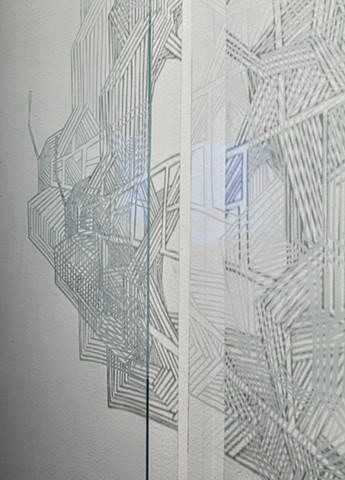 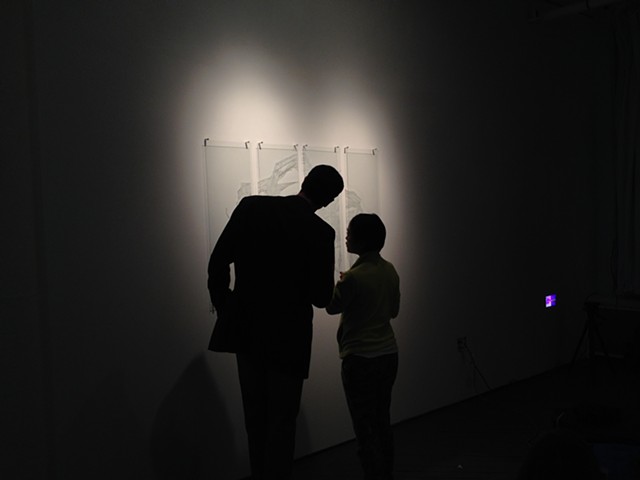 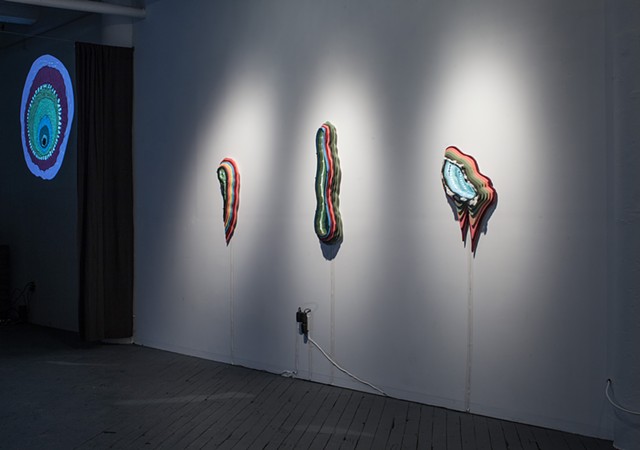 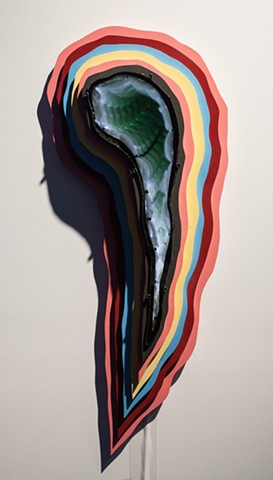 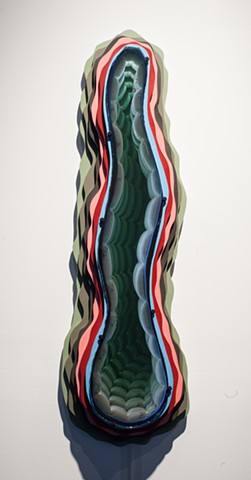 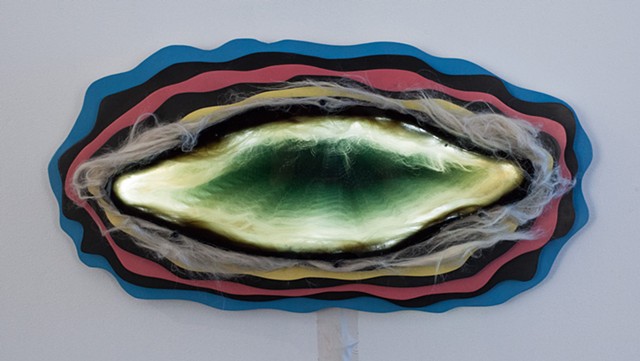 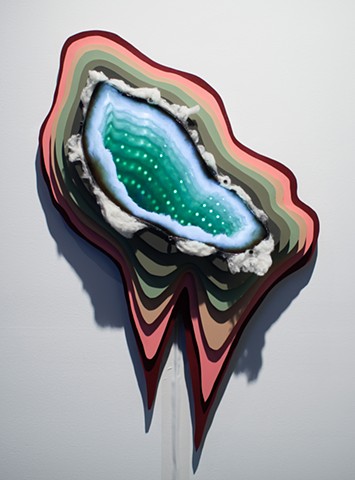 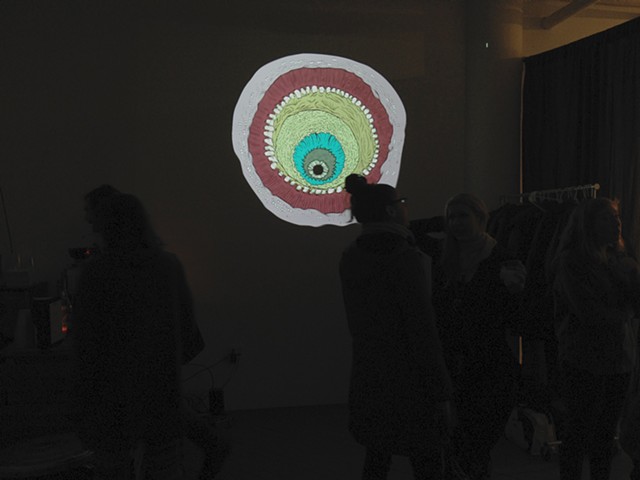 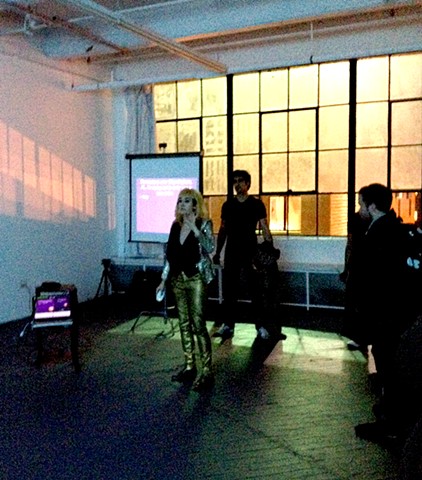 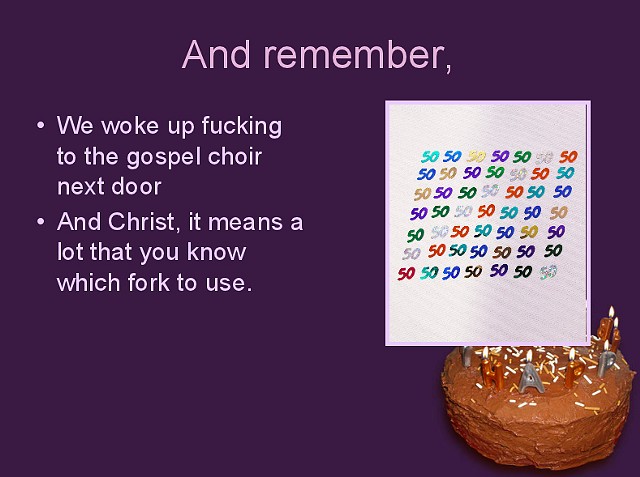 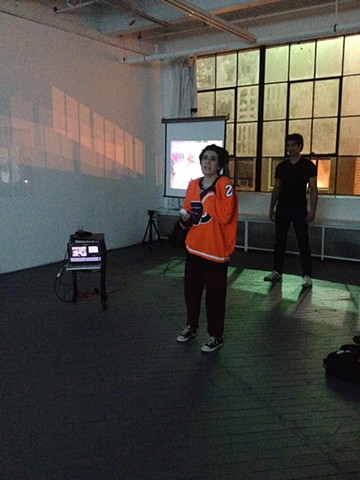 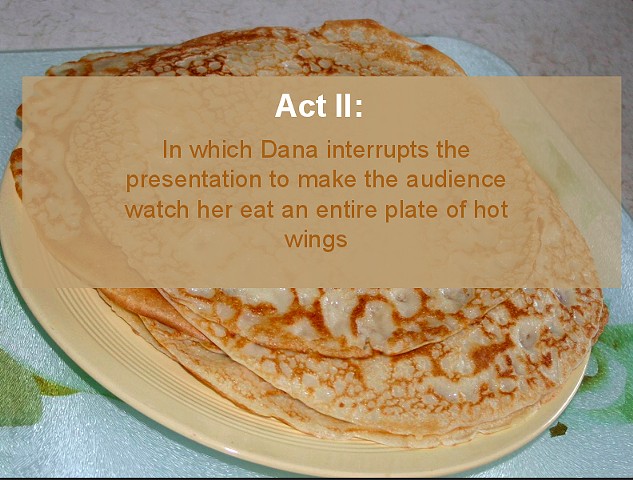 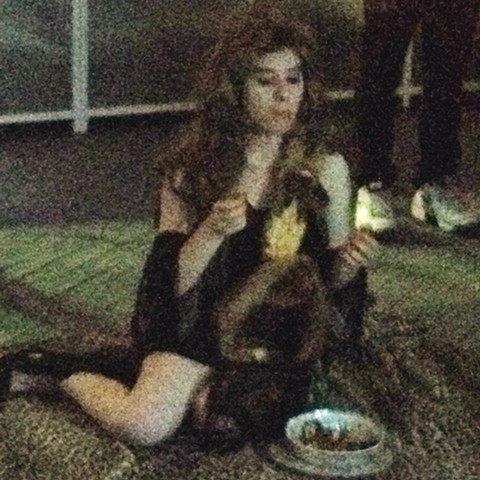 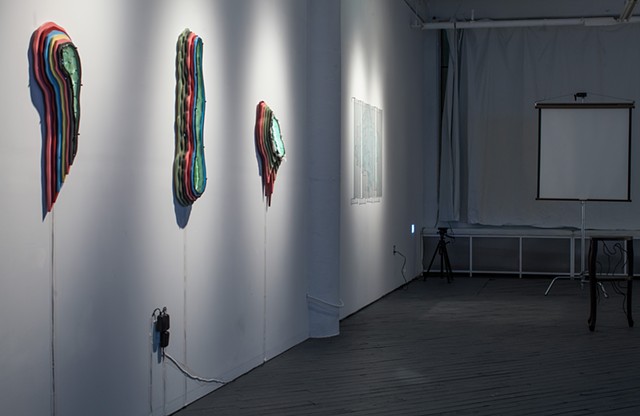 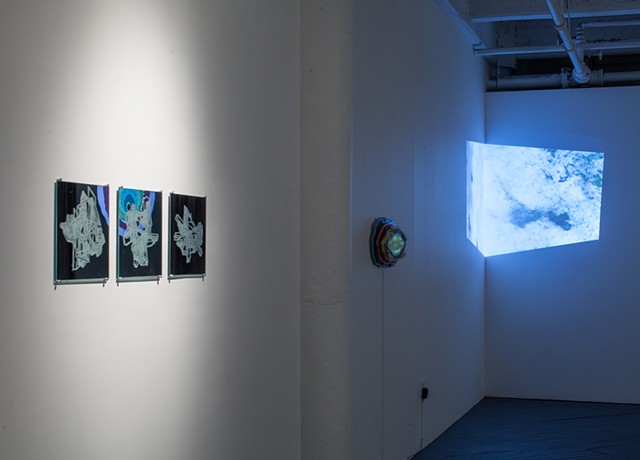 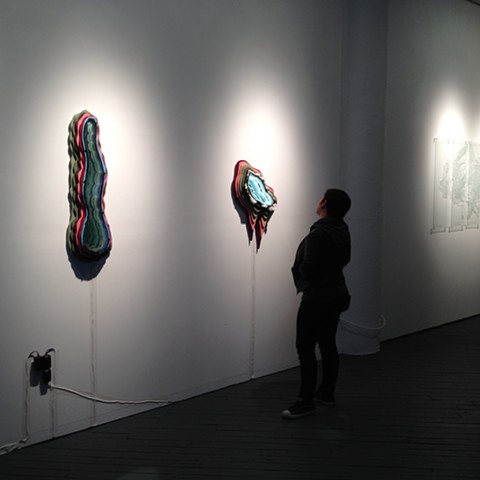 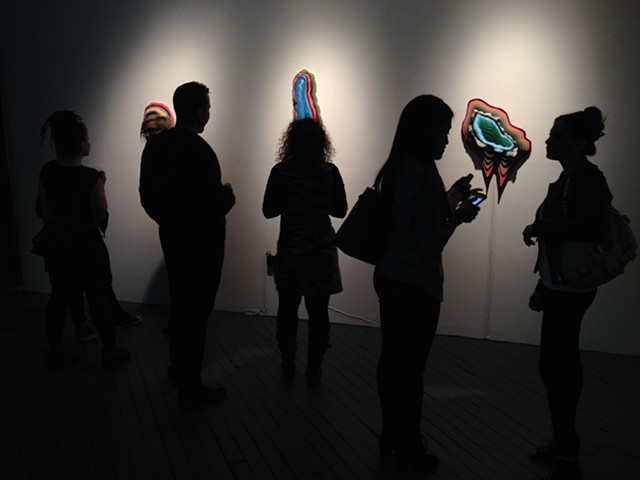 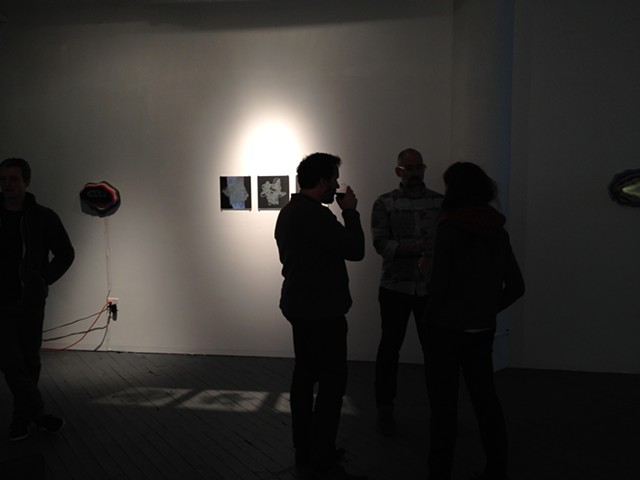